Forum rules
When two threads are posted for a day's comic, the thread posted first becomes the starting post. Please delete the second thread and add your post to the first thread. When naming the thread: Comic Name YYYY-MM-DD
Thanks guys! This keeps the forum nice and neat.
Post Reply
64 posts

There's also the guy known as Tex. No, he's not from Texas, he's from Louisiana, but doesn't like being called Louise.... 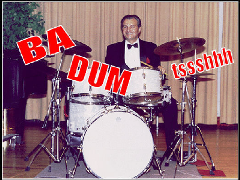 "The price of perfection is prohibitive." - Anonymous
Top

scantrontb wrote:UM,... Please tell me you're being facetious, and doing that for a laugh?... what part of AmriloJim's Gravatar info did you NOT understand? the location of his GPS?, or the AMARILLO, TEXAS part? how can you even begin to think he's up in Minneapolis?

And seriously, He could be visiting there.

I thought, after reading this strip for so long, that everyone important lived in Minneapolis...

No I--I've been there, but I live nearby, not in the state itself.
Top

(waves hi from my part of Wisconsin)
"Character is what you are in the dark." - D.L. Moody
"You should never run from the voices in your head. That's how you give them power." - Jin
Top

I'm living in Texas at the moment, but I have been to Oshkosh for the convention/airshow several times and visited laCrosse (take the brewery tour) once.
I ride my bike to ride my bike, and sometimes it takes me where I need to go.
Top
Post Reply
64 posts