My amplifier project is complete! (I think)

Let your stereophile run loose! Talk gear, media, and other electronics that makes music for your ears.

My amplifier project is complete! (I think)

About five years ago, I decided I wanted to build an audio amplifier. I just finished the job. 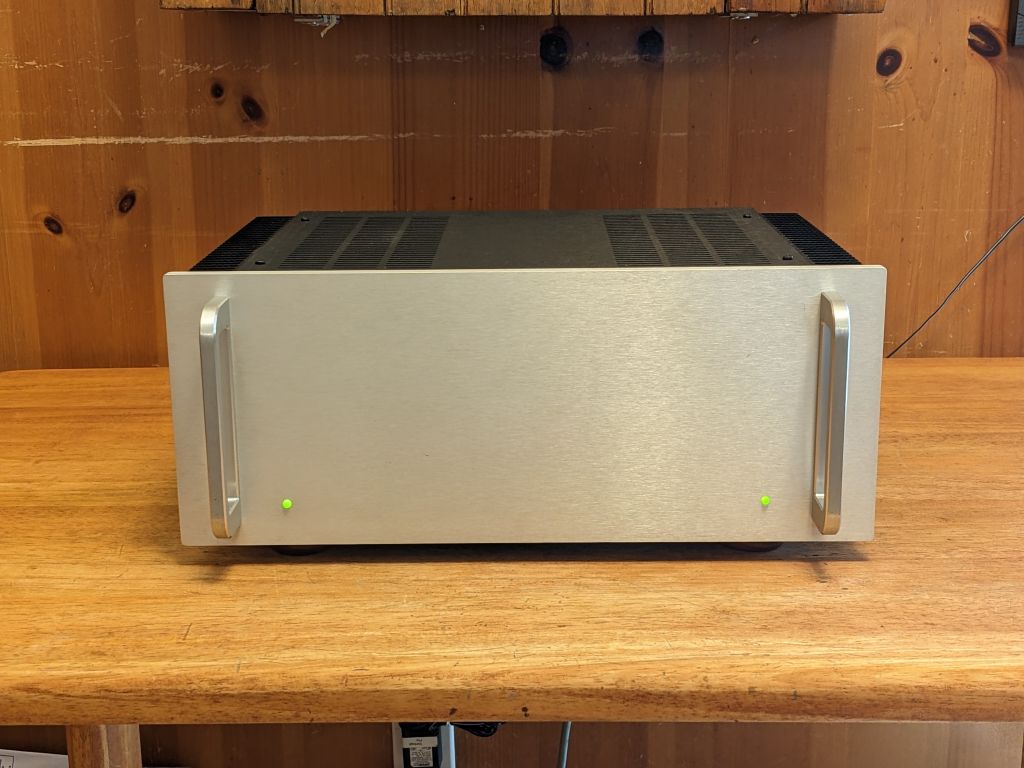 Years ago, I built a custom set of loudspeakers for our living room. They're a bit unusual, in that they are bi-amplified - one amplifier channel for the midrange and tweeter, another for the (sub)woofer, and an active "line-level" crossover feeding the amplifiers. They're also 4-ohm systems, which makes them a bit more difficult loads for the amplifiers than the usual 8-ohm systems would be. Over the years I've used several different pairs of stereo amps (all used ones) and have occasionally struggled with heat and reliability issues. I have long wanted to have an amplifier designed specifically for these speakers' needs. I decided to design and build one myself (rushing in where angels fear to tread).

My design goals included:
I didn't have to start from scratch - rather, I read and took ideas from books and web sites by several very skilled amplifier designers (Doug Self, Bob Cordell, and Rod Elliot). Couldn't have done it without them.

The overall design is a classic Class B three-stage audio amp - differential input pair, voltage-amplification stage, and output section, all using bipolar transistors throughout. My first inspiration was Elliot's straightforward "Project 3A", which I then augmented with many of the distortion-reducing techniques in Self's "Blameless" amplifier designs.

I doubled up the output transistors (using the beefy On Semiconductor parts recommended by Elliot), assuring plenty of current drive into 4-ohm loads and plenty of "please don't burn up!" thermal margin. I added a standard "safe operating area" limiter to the drive circuit to protect the output transistors against accidental short-circuiting of the speaker wires. I put each channel onto an individual circuit board, with the boards being designed to fit into one of the "DIYAudio Store" heatsink-and-case kits.

The power sequencing, muting-relay control, DC offset detection/protection, and LED control are all handled by a small control board attached to the front panel. It's essentially a special-purpose Arduino design. Input jacks are decent-quality gold-plated RCA, output jacks are professional-style four-conductor SpeakOn twist-to-lock types from Neutrik.

I did all of the circuit design, SPICE simulation, and PC-board layout in the open-source KiCAD package.

There are three different custom PC boards - the amplifiers, the control board, and the special MOSFET solid-state muting relays. The amp and control boards were made by JLCPCB in China, the muting-relay boards by OSHPark here in the US. These sorts of PC-board service are so good, so inexpensive, and so convenient that I doubt I'll ever try to etch my own boards again... it's just too much trouble. Once I got the bare boards back from the manufacturer it was a matter of a few evenings' work to stuff and solder the parts. 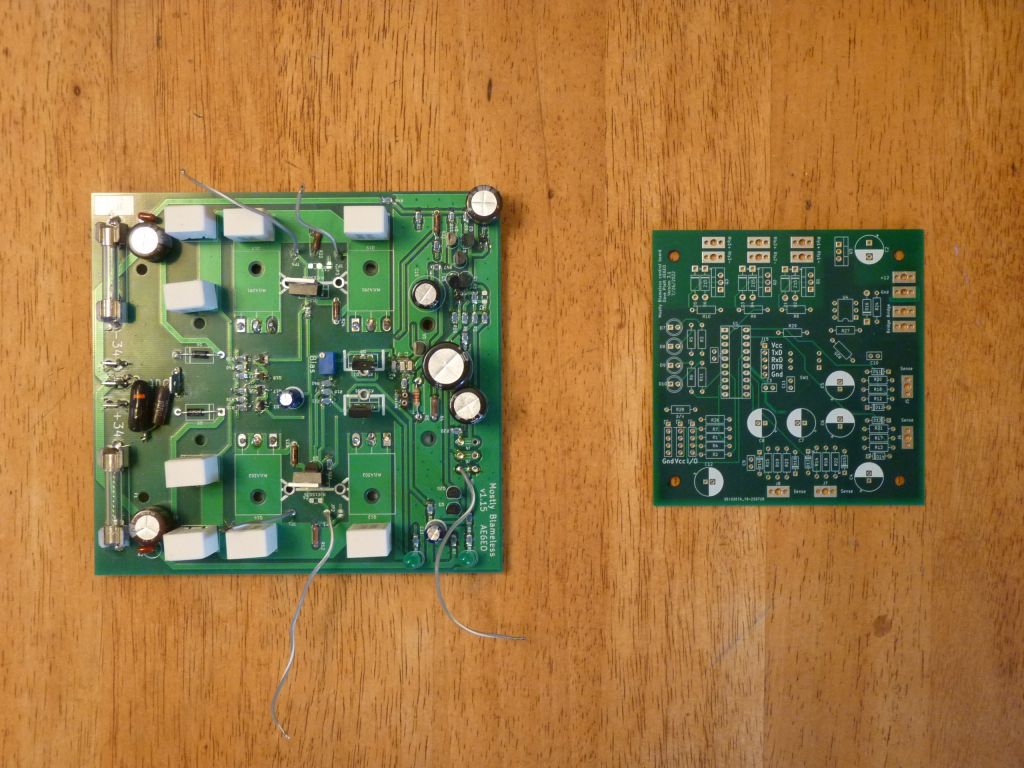 
I built and tested the amplifier boards during the weekends, a couple of years ago while we were stuck at home during the early stages of the COVID-19 lockdowns. Bringing up the boards was a fun experience. I built them in stages, starting with the input section, and working towards the output. With the addition of a temporary jumper or two, I could test the input and voltage-amplification stages, then install the output drivers and test them, and then finally install the final power transistors and heatsink and test the whole thing. 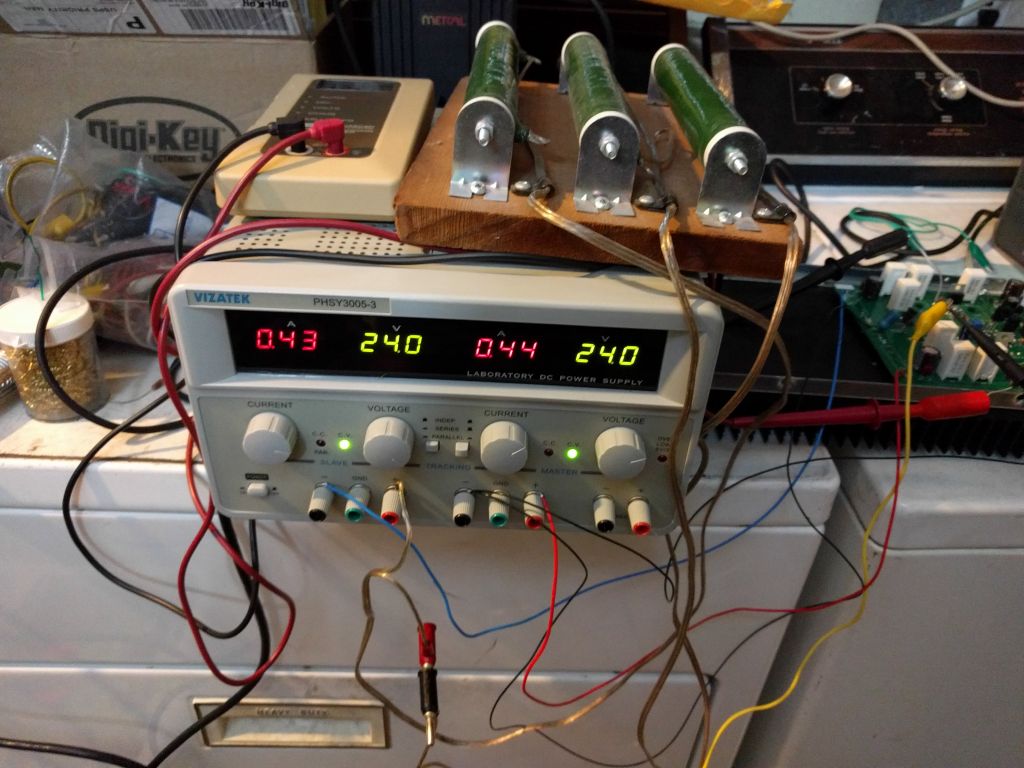 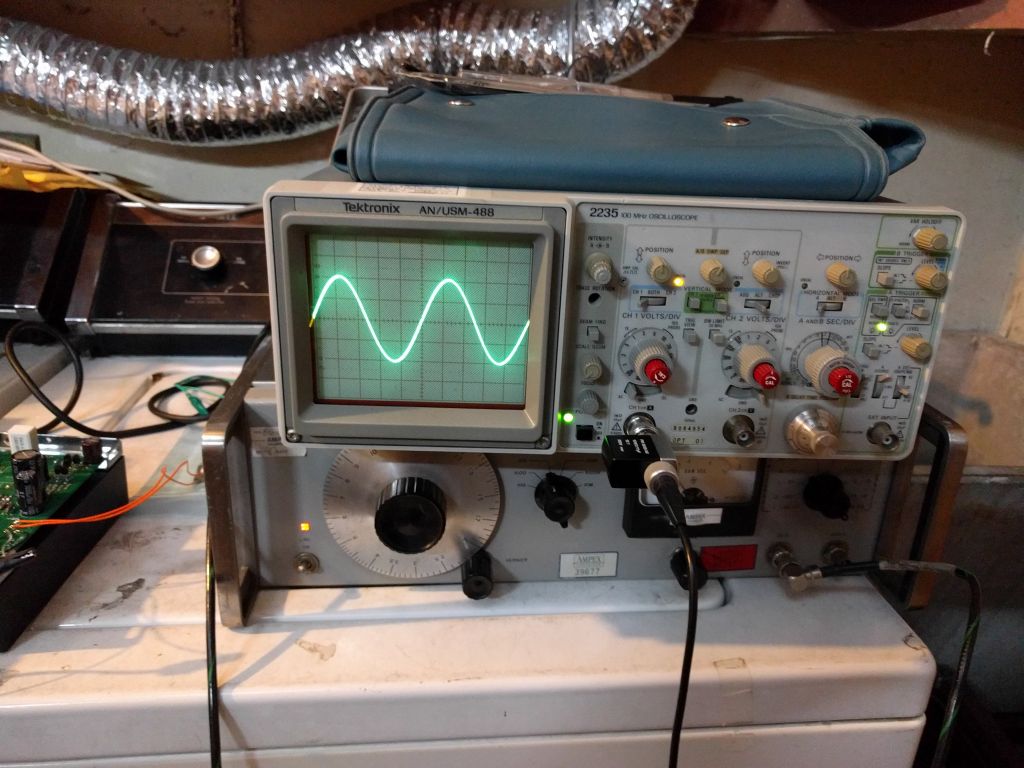 
Both the amp boards and the control board went through two iterations, as I found issues in the prototypes which justified "re-spinning" the boards before I made the full set. The amplifier prototype board uses a combination of surface-mount and through-hole parts (my first real experiments with surface-mount). After building and debugging the prototype, I decided to switch back to all through-hole parts for the production boards, for ease and security of soldering (I'm not that good at SMT, and my home-brew toaster-oven reflow soldering setup isn't all that great).

I still have the prototype of the amp board sitting around - it might end up in a subwoofer cabinet one of these days.

The power supply uses a honkin'-big 24 VAC toroid transformer. The filtered DC is around 30-31 volts under full load. The system's central grounding point is a big slab of copper, which also serves as a heatsink for the bridge rectifier. 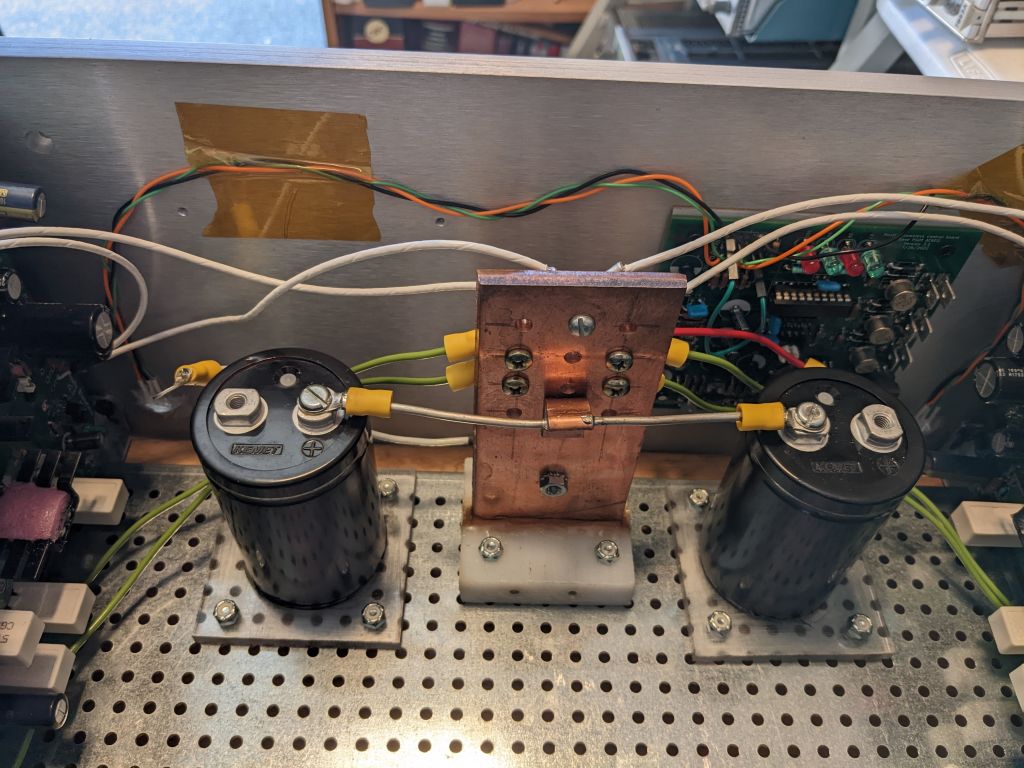 I did most of the actual assembly work over the past nine months, post-retirement. 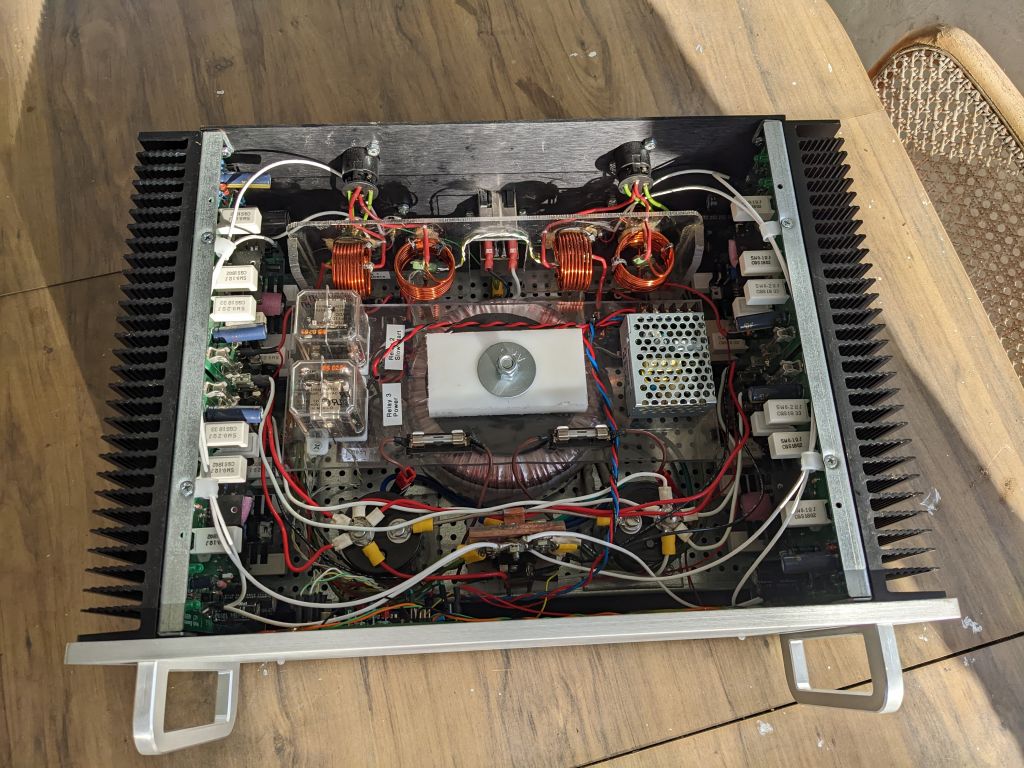 I finished up the last of the testing shortly before Christmas, and finally hooked them up to the living-room system this afternoon. I'm a happy camper.
I ran a "torture test" of the amp's ability to reproduce square waves, when driving a difficult (reactive) load such as the sorta-industry-standard "8 ohms, in parallel with 2 microfarads". The results are good - the blue trace shows the output of the amplifier board itself, and there's no sign at all of instability. The yellow trace shows the signal at the load. The ringing is caused by the capacitance, resonating with the inductance of the output-stabilization network (the big brown wire coils in the back of the amp in the picture above). Without proper stabilization, a capacitive load like this can cause an amplifier to break into a nasty oscillation which can actually destroy the amp - there's no trace of oscillation here. 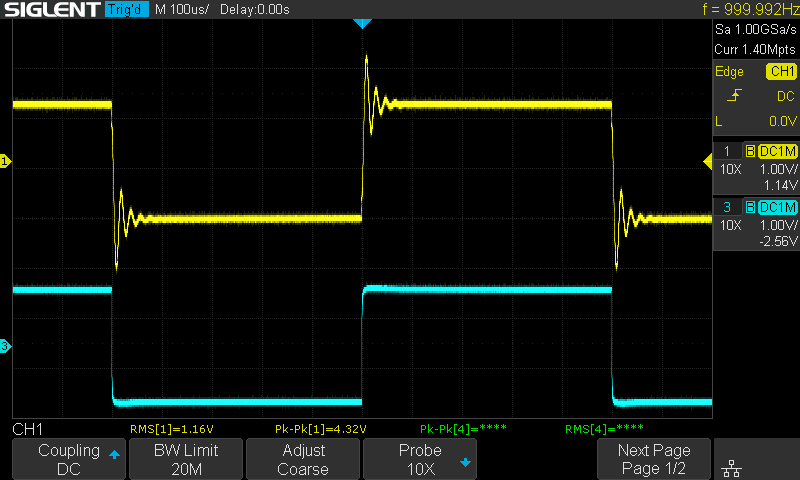 How do they sound? Fine - just like the two amps they replaced. I didn't really expect to hear any difference.

My next project is going to be to measure the whole system's frequency response and dispersion using the REW software and a good microphone, and see if some adjustment of the speaker crossovers is called for.

It's been a long project, which "went dormant" for months at a time while I worked on other things. My notes date back to January of 2018, so I guess it's almost exactly five years since I started working on it actively... and it's finally done.
Top

Re: My amplifier project is complete! (I think)

DAYUM!
Rule 17 of the Bombay Golf Course- "You shall play the ball where the monkey drops it,"
I speak fluent Limrick-
the Old Sgt.
Top

Re: My amplifier project is complete! (I think)

Return to “The Audio Room”