Also, I’m just waiting for Sarge to see my Limerick...

Actually, I think that car denotes a high degree of imagination...
Top

... of the sort that H.P. Lovecraft was so well equipped with.
Top

(it says "Vern's" along the left edge of the camper shell, and the tailgate says "Corvette". I have no idea what the other parts of the car originally were parts of, but I think there are at least four other "donor" vehicles.)

(Of course, one could note that I put the picture in a "Bad Jokes" thread...)
Top 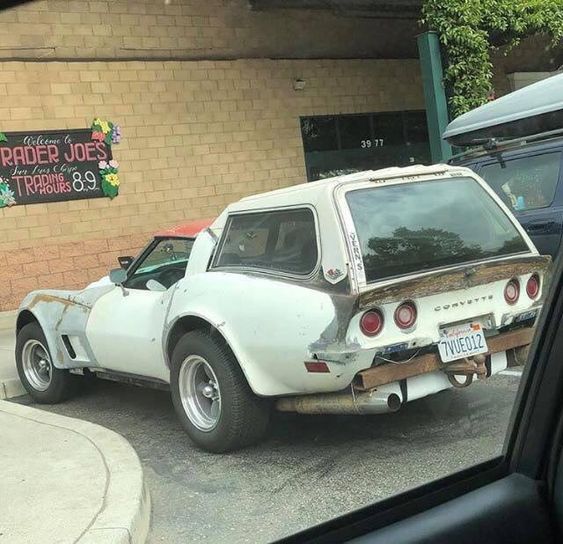 That's what you need, when you make a Trader Joe's run; lots of haul-away space to work with...


If you're old enough, You might hearken back to Harold & Maude...
, of which I'm happy to report that the Google Search I did mentions two theaters it's playing in- tonight. 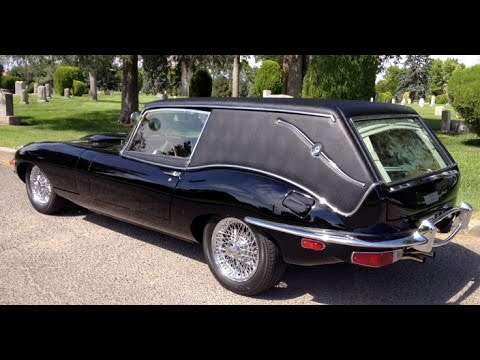 Found on the same page as this gem:

(Note: much of the rest of the page is political, particularly at the start.)
Top

Something very neat has happened in my town lately. It borders on San Francisco Bay, and part of the city property is still wetlands and wildlands. There's a city park there, which is home to members of an endangered species - the Western Burrowing Owl.

The owls haven't been doing well in recent decades. A lot of area has been lost to building (e.g. high-tech business parks), land-fill, a big concert arena, and so forth. The growing population of people has endangered the owls... people walking or riding bikes on the area, dogs, populations of feral cats and foxes, all of these have taken a toll on the owl population,

The city's trying to help, with programs to protect the habitat. This has helped, at least somewhat.

The big breakthrough, recently, was from a research team that discovered that the owls are healthy enough, but the stress of all the people around has caused them to be... well, let's say "not very romantic". They haven't been pairing up, mating, and raising families successfully.

The head of the research team proposed a solution... well, an aerosol, really... to counteract the stress. It's a mixture which contains some herbal essential oils that have a relaxing effect, some owl pheromones, a bit of cannabis extract (now that it's legal here), and oxytocin (a neurotransmitter that promotes social and family cohesion).

The team sprayed this stuff all around the "burrowing owl habitat" area over at Shoreline, and in less than a month, there were twelve new mated pairs of burrowing owls busily laying eggs and raising chicks. It was an astounding success.

The lead researcher Dr. Mendez gave a lot of the credit to his grandmother Elena, and now refers to it as "Project Meatball".

(No, he isn't being insulting and disparaging about his grandmother. He's simply giving credit where credit is due. After all, it was in her traditional Mexican kitchen that he learned how to brew up a pot of really great owl-bonding gas.)
Top

(Dave places a bowl of delicious soup into the Pun Jar. Dr Mendez said the recipe was the treasure of his Sierra madre.)
Top

'The Island of Doctor Moreau', unbidden, comes to mind...

btw- A family of Tomatoes is hurrying down the sidewalk.

Dad, in his frustration, turns and squashes one of the kids and says

Heard the following on the radio, from Laugh Again ministries, with Phil Callaway:

The annual Google IO conference is being held this next week.

It is rumored that Sergey Brin, the president of Google's parent company Alphabet, will be announcing that Alphabet will be acquiring Tesla, which will be merged with the Waymo autonomous-vehicle division and with the Pixel phone group. The combined organization is expected to discontinue production of Tesla's luxury automobiles, and focus on the development of autonomous utility vehicles having high-end mobile electronics capability.

It is rumored that Sergey Brin, the president of Google's parent company Alphabet, will be announcing that Alphabet will be acquiring Tesla, which will be merged with the Waymo autonomous-vehicle division and with the Pixel phone group. The combined organization is expected to discontinue production of Tesla's luxury automobiles, and focus on the development of autonomous utility vehicles having high-end mobile electronics capability.

It makes perfect sense... Androids do dream of electric Jeeps!

Where's Deckard when he is really needed...
Top

Even Jasper says "Pleez, none more..." 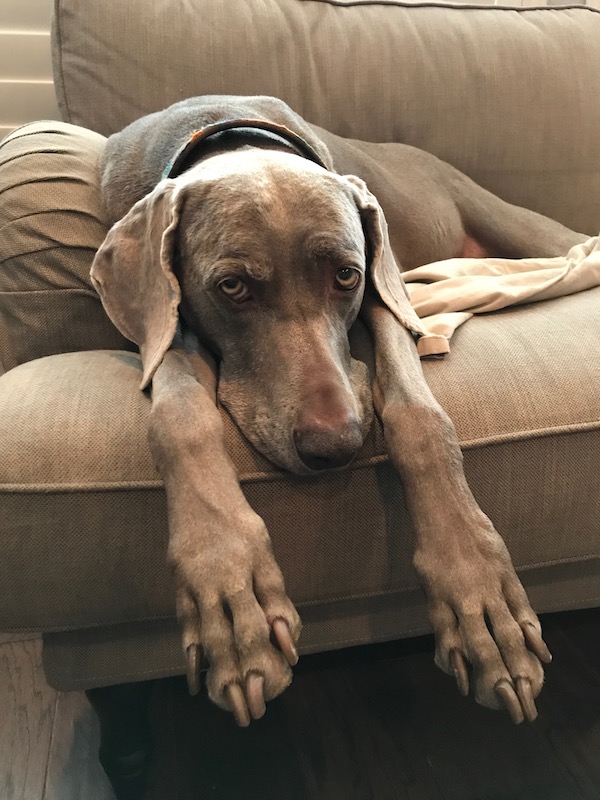 Jasper puts up with a lot. It's tough being a dog (as any dog will tell ya). But there are limits.

Saccharomyces cerevisiae is the linchpin of civilization.
Top

The "J" is putting up with inner-loop life in Houston the best she can. Her previous life at the Casa de Inundación was rather different. it's been a year since we moved and she has accepted her current lot in life- as long as rawhide chews are on hand. The area we have available for walks consists of several blocks of surface streets with a mix of single family homes from the 40's/50's and much newer townhomes. She does have preferences for where to go- it depends on if there is an annoying barky dog behind a fence or gate. We cross side to side at her discretion. There are canine friendly establishments within easy walking distance, and she knows them well. One even provides tasty biscuits to four-legged visitors. Needless to say, that one is a favorite. 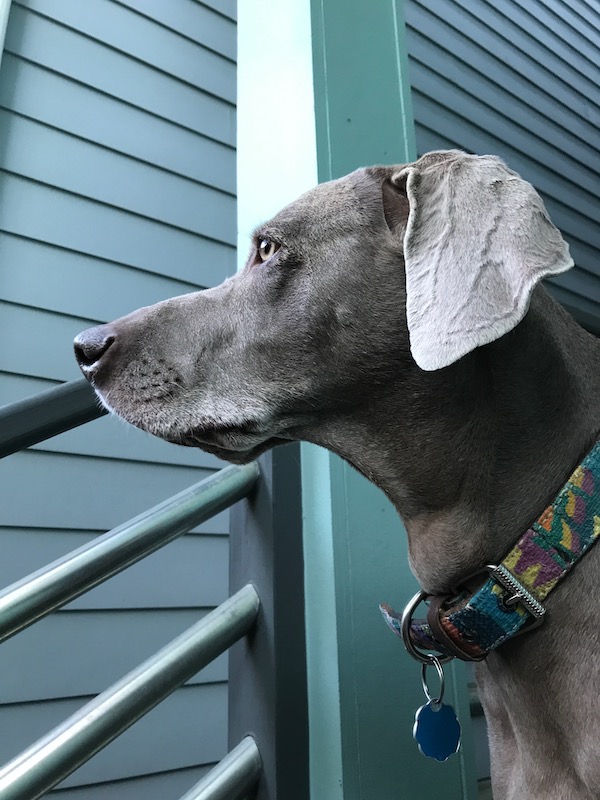 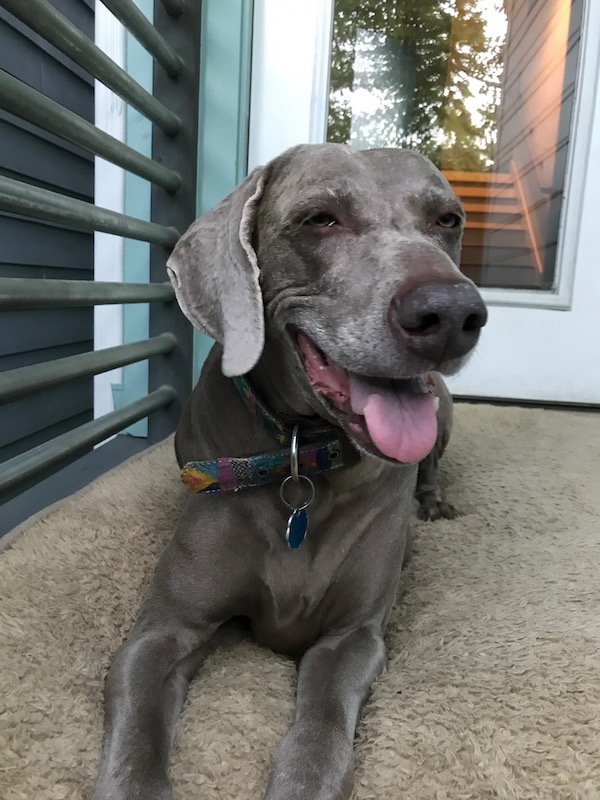 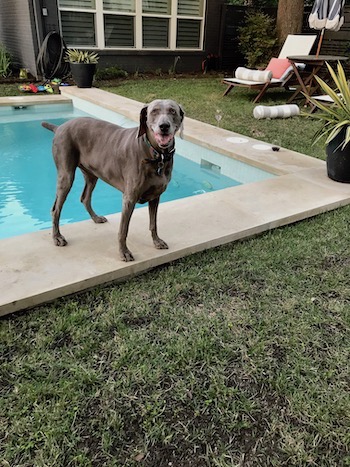 The poolside pic was at a party we attended in Austin, it's not my backyard!
Top

Is it possible that you might have meant to post this in the "More Stuff" thread, rather than the "Bad Jokes II" thread? Perhaps?

Is it possible that you might have meant to post this in the "More Stuff" thread, rather than the "Bad Jokes II" thread? Perhaps?

Intentionally here since Typeminer remarked on it being nice to see her. But yes, More Stuff or Photo Album might have garnered more attention.

She is at my elbow as I type, angling for a rawhide treat.
Top

Good to see Jasper whatever thread.

Now, you want a bad joke?

Saw a thing just lately--with pictures--that dogs can ride the New York subways. If they fit in a bag!

Try convincing Jasper to ride the subway in a bag.