Clearly, vandalizing something with penises is a time honored tradition.

It isn't always vandalizing, either. In Bhutan it's a cultural tradition... a sort of a "good luck and protection" charm that people paint on their own houses.

I wonder if the Roman soldiers in Britain had ever done a troop rotation in the Himalayas...

Note that Roman Bakers would have a phallus image or statue on their ovens to prosper the bread to rise!
Don't let other peoples limitations become your constraints!

I might end up with a job working in detail again, working for the folks who replaced us at the McLarty chain. Hopefully if I do end up working there, they don't try to make sure I do more than my fair share.
There is no such thing as a science experiment gone wrong.
Top

Best of luck on that! I know that people really do want to get their lives back to normal (although "normal" is probably not going to be the same as it was, for a long time). Car detailing seems like something that people are going to want again once their area "opens up".

A good thing about it, I guess, is that it's a job which can be done (and usually is) without direct contact with the customers, and it's a job which is already expected to involve a lot of cleaning! Just use the right cleansers and disinfectants, and plenty of fresh paper towels!

Might be wise to let each car "air out" with the doors and windows open, for at least a few minutes, after the customer drops it off.
Top

I used to do that kind of work. Most of the detail work is cleaning up trades to put on the lot, though there's also the sold units. It's my understanding that this will be commission work, and one of the guys there has the same first name as me.
There is no such thing as a science experiment gone wrong.
Top

Really? I didn't think "Alkarii" was much of a common name...

Well, I was thinking I might call up the apprenticeship office on Monday to try to get into a program. If I can't get ahold of anyone there, I'll just give the other guy a call. Hopefully, if I do get it, it won't be as frustrating as when I was at Honda, with everyone trying to make sure I did more work than they did.

I can still work there for a little while and get an apprenticeship later, of course.
There is no such thing as a science experiment gone wrong.
Top

Think Bob and Doug left at a good time?
"Character is what you are in the dark." - D.L. Moody
"You should never run from the voices in your head. That's how you give them power." - Jin
Top

Think Bob and Doug left at a good time?

???... the two astronauts? Timing is spot-on!
Rule 17 of the Bombay Golf Course- "You shall play the ball where the monkey drops it,"
I speak fluent Limrick-
the Old Sgt.
Top

Yup. Even Arkansas is seeing a bit of of the craziness now, and we usually get very little. I heard a helicopter when I stepped outside a little while ago, but I'm also miles away from where everything is happening.

I even had a falling out with a couple of relatives because they started spewing racist bullshit at me.
There is no such thing as a science experiment gone wrong.
Top

We regularly have helicopters flying over here - not a big surprise, considering that Boeing and McDonnell Douglas have their 'copter production plants about maybe two miles away from me.

But last night was... a bit unsettling. I heard the copters overhead about a half hour after curfew was supposed to start.
"Character is what you are in the dark." - D.L. Moody
"You should never run from the voices in your head. That's how you give them power." - Jin
Top

Yesterday afternoon I set out to return home, having overnighted w/ my son. He lives on the other side of the Bay from me.

We picked up some Bar-B-Q from a guy cooking on an open grill, in an otherwise empty parking lot, and made our way to Bayfair Mall, which is nextdoor to the BART train station.

Stopping by the ATM, we noticed BevMo, GameStop and a few beauty supply places had been broken into.

It was about 5pm.

The local police had blocked off the entrances to the Mall's parking lot and we where puzzled as there didn't seem to be any other human beings around. Other than a few 'yutes' playing Soccer, w/ a basketball.

The Mall had been boarded up for quite some time now, but we found an external bench to sit on and began eating some Q'...

Then we heard sirens.

Then we saw what looked like a police car chasing a white van.

,Oh Boy!, says I as I thought it was a high speed chase & we were in for some entertainment.

It was a police car and a white van full of Ninja-gus, riding hell bent for leather w/ the side door wide open.

Train station had been closed, stuff was being rerouted, first I went South and then I went North, road past any Oakland and San Francisco highjinks via the underground, and by the time I navigated and improvised, it was 11pm or so, but I made it home.

Seems while I'd been traveling and later sleeping, the frustrated populace took to the streets and really did a number on the Retail store fronts.

There's a little bit more to the story but I'm tired of typing on the little screen...
Top

It was interesting/neat to watch a woman driver (pink hoodie and all) back up a tractor trailer into a constructions site (and quite expertly, I might add... better than many other drivers I have seen in the past).

It was amusing to see the woman's cat peeking out the driver side window, as she was backing up...

Not quite the same, but this is as close as I can get to our familiar story setting, from Montréal... 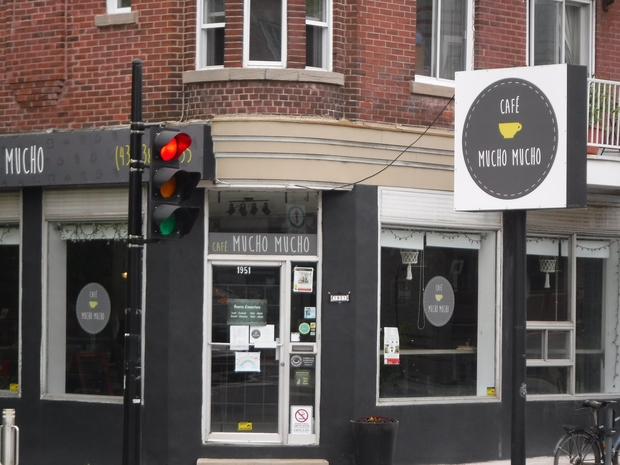 Well, I'm employed again. I work at the same Nissan dealership I used to, several years ago, but now instead of working directly for the automotive group, I work for the vendor that takes care of the detail work. I'll have 6 hours on the clock, working on commission. Thankfully it isn't nearly as bad as Honda was (I hope that place's sewer pipes overflow just enough that the whole area smells bad), but it's still gonna suck a bit. That being said, I'm still thinking about getting into trade school. I may try for something other than electrician, though. Maybe HVAC. As long as it isn't plumbing.
There is no such thing as a science experiment gone wrong.
Top

You da man, or at least our man.

Click the link, the cheer at the end is for you.

Here are two more amusing quotes put out by my wallpaper changer:


It's the opinion of some that crops could be grown on the moon. Which raises
the fear that it may not be long before we're paying somebody not to. - Franklin P. Jones

Thursday, I got called in on my day off because they had only the manager and assistant manager of the detail crew (which is actually normal; there's normally never more than two people on the clock) because there was a sales event going on, while at the same time the dumbass GM of the dealership decided to also order a ton of new inventory. It was so busy that the detail manager couldn't take the time to get anything to drink, and ended up with heatstroke that evening. The next day, I had to work from 8am to 8pm, and the day after was busy as hell. I ended up getting really pissed at one of the sales dickheads, and left twenty minutes early, texting my boss (who was still not back at work yet) that I was quitting.

He managed to convince me to give two more weeks, and I was back in there yesterday... only for the place to close at a little after 3 that afternoon, because an employee may have been exposed to the virus. I went in today, and before I even clocked in, the manager quit, because a ton of trade ins came back to us, and the higher ups in the detailing company refused to send anyone to help us get it all handled.

So, since the assistant manager was due to be off tonight, there wouldn't have been anyone to sign off on my cars in the system, so I went home. The assistant manager ended up coming in, but I didn't want to waste fuel going back up there, and he's probably gonna quit, too.

The good news is, there's a company near there that is hiring sprinkler fitters and apprentices, so I might have a shot at a job.
There is no such thing as a science experiment gone wrong.
Top

From my military days: "When no one's in charge, you are."

This might be an opportunity to step up and handle (within reason) those things the layer above you dealt with and report it to the people above them. Initiative and all that. The powers that be with either recognize your efforts or they're so screwed they can't conceive of an employee actually trying to do the job properly.
Don't let other peoples limitations become your constraints!

It gets better: the assistant manager went in after all, but because I went back in today, they're demanding I go in tomorrow, which was supposed to be my day off, and I'm getting written up because of what happened. In fact, it sounded like I'd have been written up if I had gone back last night, even though I was under the impression that the assistant manager was also quitting.

Their reasoning for having me go in tomorrow is because I not only left yesterday, but also because the dealership shut down early on Monday because an employee may have been exposed to the coronavirus.

The good news is, the company nearby that installs fire sprinklers is hiring sprinkler fitters and apprentices. So I'm calling them tomorrow, and depending on how things go, I'm not even gonna go to the dealership.
There is no such thing as a science experiment gone wrong.
Top
Post Reply
5606 posts