There are indeed plenty of websites that can help you learn more about sewing if you care to look.

I'm more "utilitarian" than "fashion", so I ended up supplying my existing knowledge via sites that dealt with DIY equipment making (hiking, hammocks, packpacking, etc). Whatever bookmarks I have are too scattered across for me to find right away, but if you start with the Hammock Forums DIY subforum, I'm sure you can find links in various threads (no pun intended) that would lead you to more sewing info/instructions.
Top

Today's pro tip: keep your fingers away from the needle.

Stitching your fingers to the work hurts, and is liable to cause bloodstains.

Coke removes bloodstains. (The soft drink, not the drug.)
There is no such thing as a science experiment gone wrong.
Top

Though I'm sure that coke, the drug, would make you forget all about the pain...

It's been rather quiet around here, so I'll throw out a "What I did this summer" post.

Back in August I told the people at work that I’d be gone for two weeks. Well, I did give an earlier heads up to those that needed to know. Took off on a road trip to New Mexico and Colorado. First stop was in Austin TX to pick up a buddy, next stop was in Santa Fe NM to pick up his brother-in-law. Spent a day there looking around and acclimating to elevation.

First on the list of places to see was Rocky Mountain National Park in Colorado. Smoke from the California wildfires had the air hazy- couldn’t smell the smoke, just could see it. We spent two days visiting the park, staying nearby and rising early to get hikes in before the rest of the world showed up. RMNP is easily accessible, the crowds build as the day goes on. The hikes are rewarding with amazing mountain scenery and waterfalls that were still active despite being late summer.

After RMNP we drove to Telluride CO and rented a jeep that would take us up and over trails to mountain passes that were 12,000 ft and higher. The jeep we had was probably overkill for most of the time, but when the “road” was steep and rocky the big tires and more better transmission/suspension did the job nicely. I should have taken photos of some of the rougher trails but the thing is you need to keep moving and watch the edge at all times. The vistas that greet you at the tops of the passes are amazing. There was a fair amount of traffic on the trails- we met other jeeps, a Rover or two, old Broncos and Blazers, lots of four wheel drive scramblers, and motorcycles that would come buzzing along- a Go Pro style camera was usually on someones helmet. We were on our way up to Imogene Pass when we rounded a turn to find a woman and young child standing next to a bicycle. Probably up around 12,000 ft elevation. Looking a little further along the trail we saw a man walking another bike down through a rough spot. He also had a small child with him. Both bikes had gear strapped to sides and backs. We stopped, pulled over, let them get sorted out and past us before we went on. Talking with them briefly, they told us they had started in Ouray, ridden up to the pass and camped for the night, and were heading down towards Telluride. On bikes. With the kid’s bike extension on the back of their own. At that elevation. We felt a little less manly riding in the jeep as we left them behind. Well, they were a lot younger than we are. By the way, the kids looked thrilled to be there. Not.

We spent three days with the jeep going over Imogene Pass, into Governor Basin, over Engineer Pass, Cinnamon Pass, Stony Pass, and Ophir Pass. The weather was almost perfect the entire time. Highs in the low 70’s, lows in the 50’s. Late afternoons typically saw a little storm come through and wet things with a shower or two. Stony Pass got us close to a bucket list item of mine- seeing the headwater of the Rio Grande. A little ways over the pass there is a place to pull off the road and access a trail that leads up into the mountains. It is actually part of a long trail system that wanders through Colorado. The walk to the headwater was about a mile and a half, maybe longer. But seemed to take forever since we were at 12,000+ ft elevation. Along the path we met several backpack laden hikers that had been on the trail for a few days. Told us about spending the night near the continental divide and weathering a storm that blew through with strong wind gusts that pulled at their tent while dropping hail and rain. Sounded exciting, but I was glad to have been in a hotel in Silverton that night. Thunder does sound a lot closer when you are hanging out at those elevations.

We finally reached the point where the shallow stream that is the beginning of the Rio Grande crossed the path. It doesn’t start right there, the seep where it actually starts is further up the slope at the edge of a scree that has been formed over the ages through freeze and thaw cycles. I thought to get to it by following the stream bed and occasional game trail, my buddy decided to follow the hiking trail up towards the continental divide and see what options it offered. The third amigo decided we were both nuts and found a comfortable rock to sit on and wait for us to return. My attempt came to a stop as I approached a short ledge with water trickling over its edge- it stepped up towards the scree and looked inconvenient to get around. Not wanting to risk a sprain, a fall, a heart attack, all on top of being out of breath, I decided I was close enough. Called it good and turned back. My buddy made it up the trail to the divide but didn’t find an easy path over to the actual headwater. The abundance of loose rock that he would have had to traverse to get there and back plus the lack of air made him decide he was close enough. And you are always encouraged to stay on established trails rather than wander off into pristine areas where the plant life is fragile. I think he got closer than I did.

Leaving the Rio Grande behind, we made our way back to Silverton and then on to Ophir Pass which is relatively easy to drive. Short and scenic, it’s a quick way to get back to Telluride rather than taking the long way around by highway. On the way down from the pass, we had to pull over to let a jeep club out of California get by. Everyone looked happy to be there and waved as they passed. As we descended the trail and reached the tree line, the weather started to turn. It was late afternoon and about time for the usual afternoon storm. Hopefully they didn’t get caught in anything bad when they were near the top of the pass..

Our next stop on the road trip was Mesa Verde National Park. The afternoon we arrived we joined a guided tour that took us through the park to historically significant sites that highlighted the 500 or so years that the ancient ones lived on the mesa top. We stayed the night in the park and got up early to take the trail to Petroglyph Point (My favorite part of visiting Mesa Verde- I’ve been to the park several times). Well, my buddy and I did. The third amigo was still under the impression we were still both nuts so he stayed behind to drink coffee and watch the world go by from the balcony off his room. The trail to the petroglyphs takes you along the canyon wall on a ledge area that extends the length of the canyon. It’s a three-hour long (round trip) hike that is a little challenging in areas but worth the effort to see the petroglyph panel. Once past the petroglyphs the trail climbs to the mesa top for an easier return to the visitor center where we started. We were back to the rooms before 11AM, loaded our stuff in the vehicle, and headed back towards Santa Fe. We spent another day in Santa Fe to relax a bit before the 12 hour drive back to Austin. I watched hummingbirds chase each other around the garden at my host’s place for part of the afternoon.

I’m ready to go back and do it all over again. Except for the one “shortcut” that we took to get to Governor Basin. It took several days for my teeth to settle back in their sockets after the jolts and jars we had to endure on that miserable route.

Last I communicated with Pablo, he's fine. Was sidelined by a respiratory illness that lingered for a while, now he's back to thinking about sketches and updates to the story. He's off Fazebook, decided it wasn't for him any longer. He's still on Instagram and Twitter and I see the Reddit links, though I have yet to venture that direction.

I hope everyone is well, things are moving in the direction you desire, and that better times are just a little bit further ahead. Positive waves!
Top 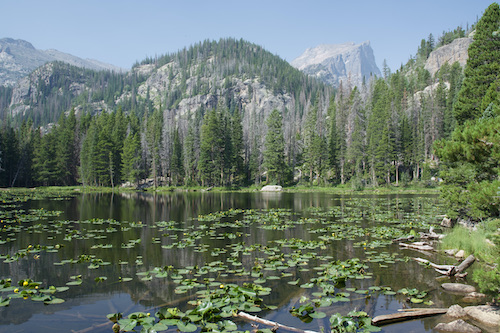 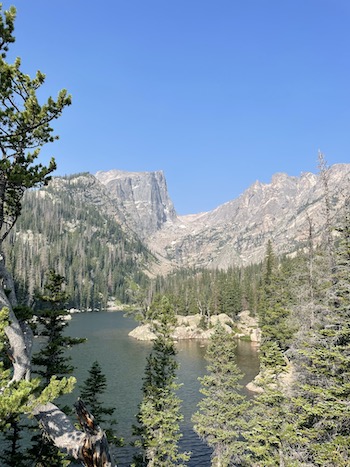 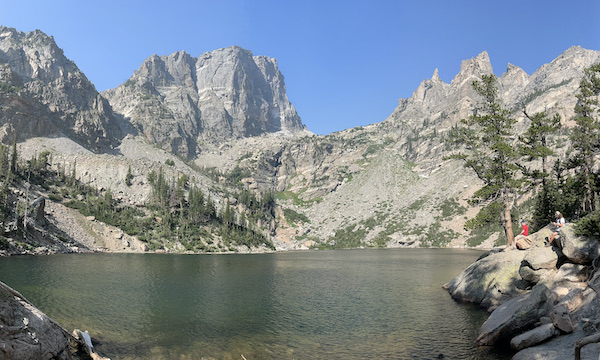 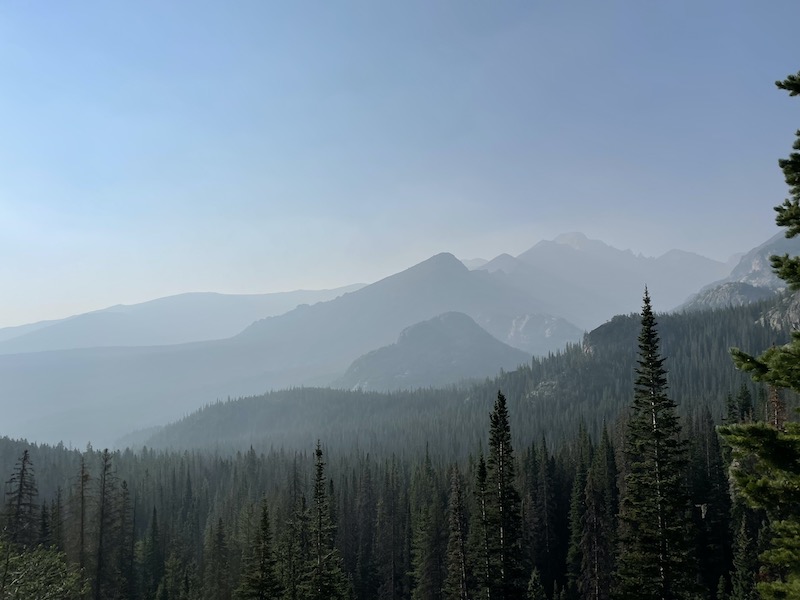 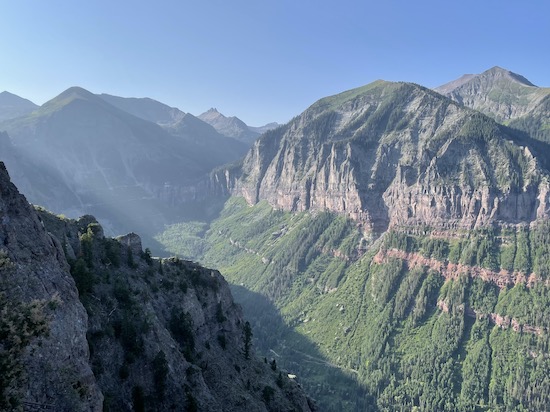 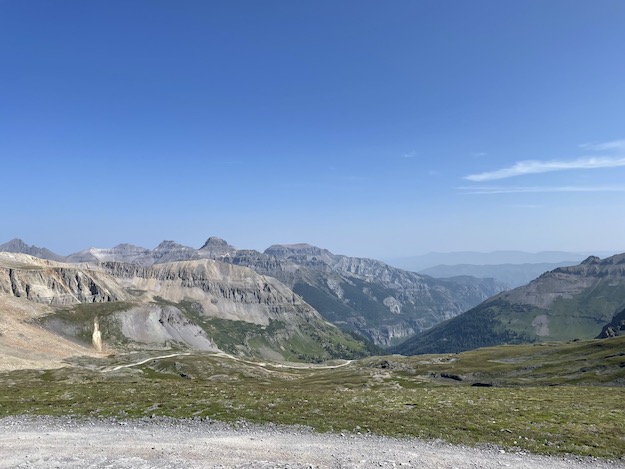 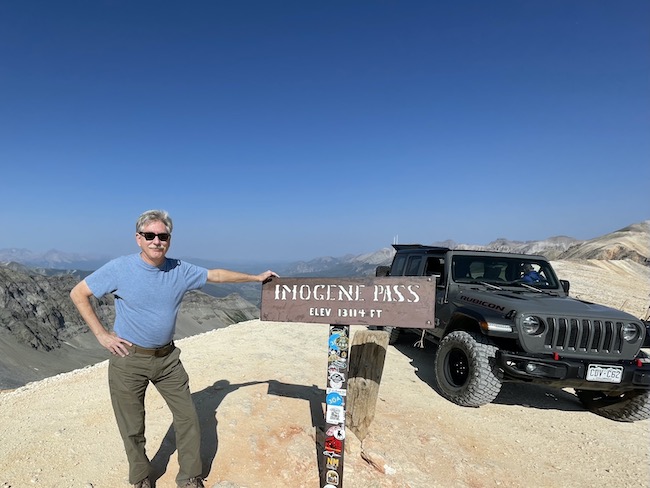 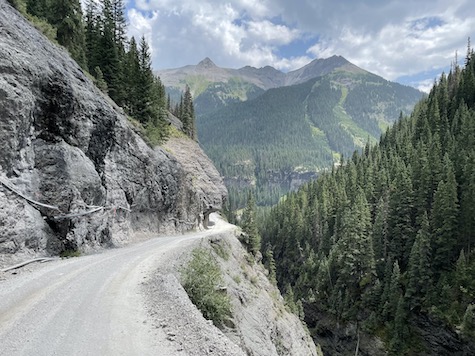 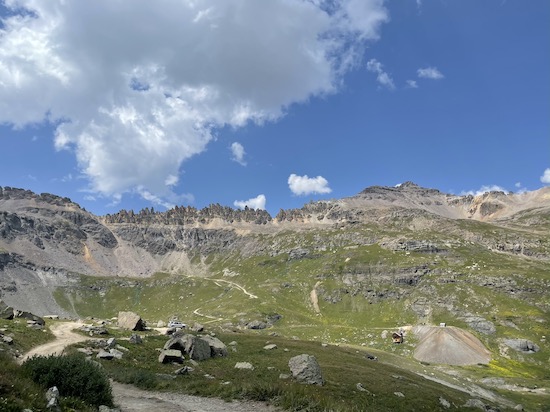 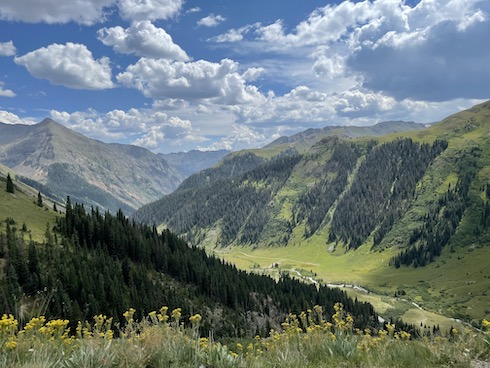 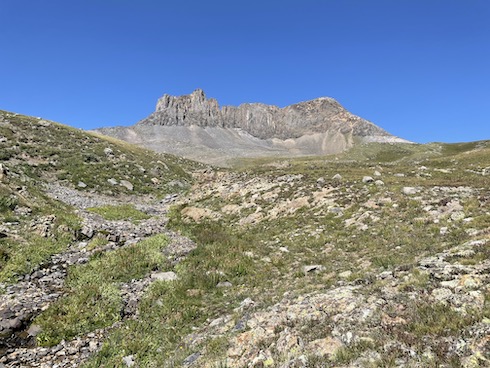 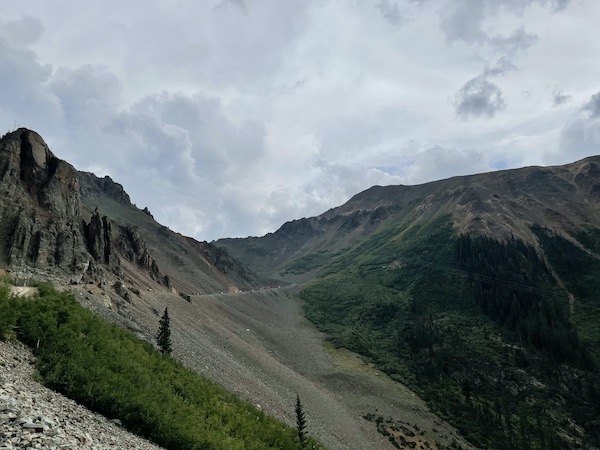 
On to Mesa Verde NP 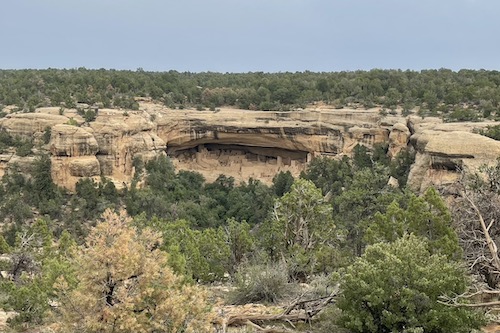 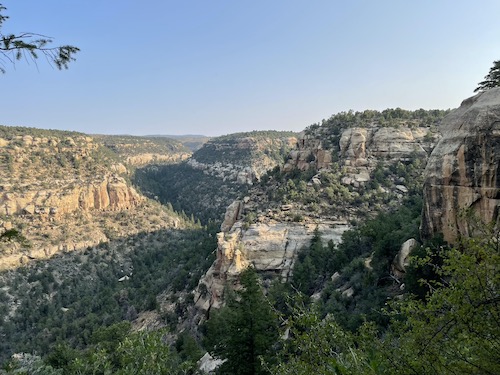 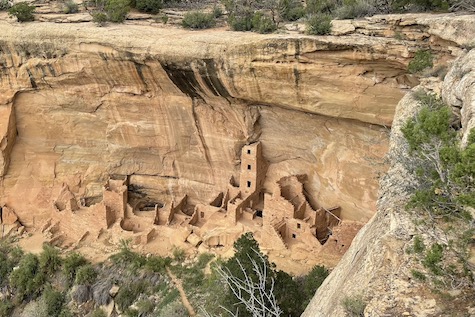 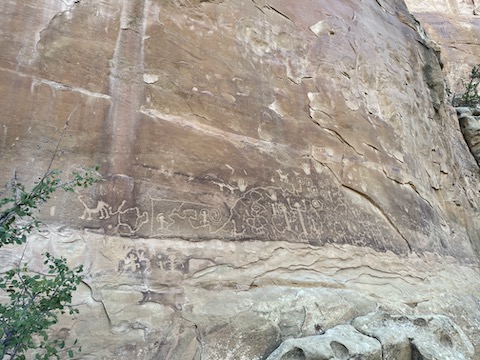 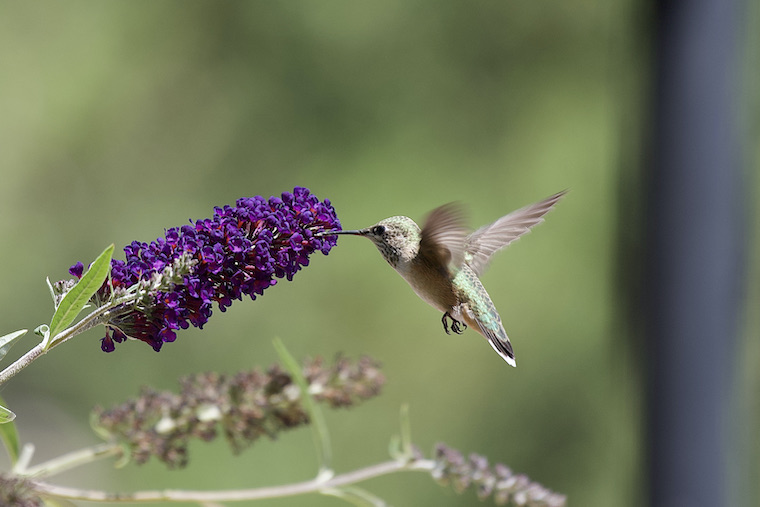 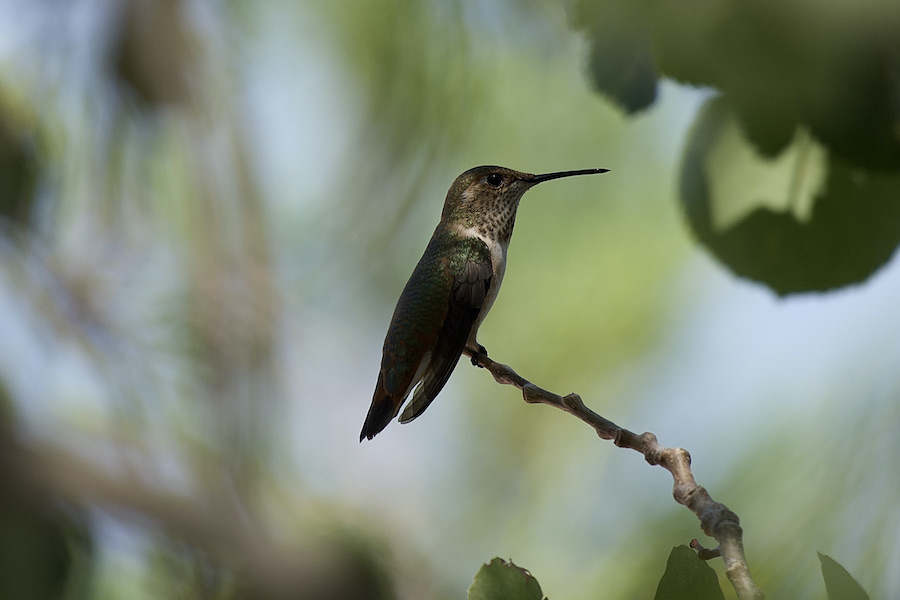 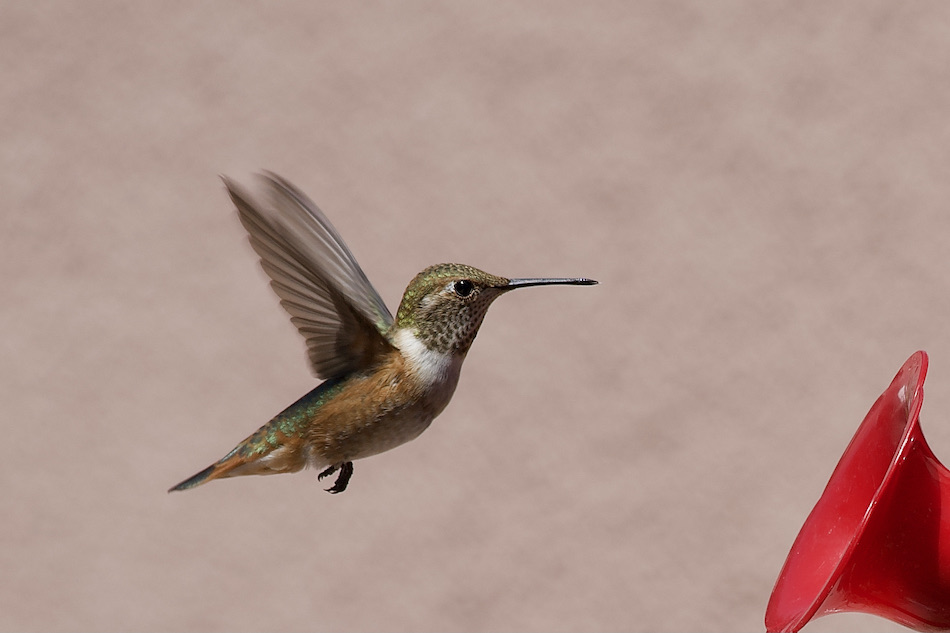 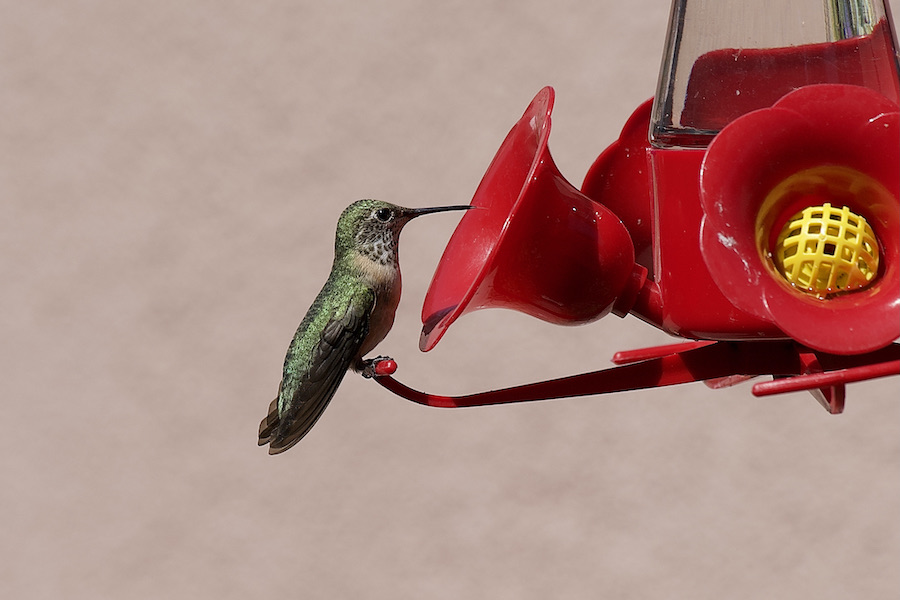