Forum rules
When two threads are posted for a day's comic, the thread posted first becomes the starting post. Please delete the second thread and add your post to the first thread. When naming the thread: Comic Name YYYY-MM-DD
Thanks guys! This keeps the forum nice and neat.
Post Reply
105 posts

Dave wrote:I must therefore throw myself upon the mercy of the Court, such as it is, and request a sentence which properly reflects the utter disgrace in which I find myself.

No need to s'pose the nite to face your cut.

That sentence will do very nicely, thank you - it is sufficiently twisted to be very appropriate!

Mark N wrote:Paul, that was worth the buildup. And talk about a hot Jaguar!!! You have made another look for Monica that will stay with us forever (and the cos-play with it would be stunning)

Did it have awesome headlights?
Top

Do I detect a pattern here?

BTW, the whole jaguar-skin thing reminds me of a classic episode of BBC Radio's The Goon Show where our hero Neddy has disguised himself as a Zulu warrior in order to rob a bank. Like you do.

Bank Manager: Oh, Neddy!
Neddy: Curses, I'm spotted.
Bank Manager: Why are you wearing that leopard skin?
Neddy: So That's why I'm spotted!
The paper maker is the basest of all creatures. He deprives the beggar of his rags to make white sheets for editors to lie on.
--early 20th century school essay, from Fresh Howlers, ed. H. Cecil Hunt (UK, 1930)
Top

Yamara wrote:No need to s'pose the nite to face your cut.

Yamara wrote: The Ritual installed a Key to that doorway. It can't be removed "without killing her"; killing her doesn't seem like such a big wumpus anymore.

um.. AFAICS..
Monica is a 'doorway' that spirits can use to get through...

the 'key' is actually an apotropaic dagger, that cannot harm her, while the ritual is taking place - what you see is the 'spirit half' of the doorway?? *that* is what the dagger is plunged into, and the handle broken off... :/
http://wapsisquare.com/comic/your-precious-doorway/

The handle cannot be **put back in** without killing her... unless they can recreate the same ritual?? a bit difficult, with most of the stuff having gone??

the rest I'll leave to someone who has a better memory and ability!!! maybe they can correct my mishtakes..

Is it against library policy to poit the contents of a septic tank directly above Phix?
Top

HospitalDrone wrote:Is it against library policy to poit the contents of a septic tank directly above Phix?

You almost ended up owing me a new keyboard. Fortunately I managed to keep that mouthful of Diet Coke under control...
Top

zachariah wrote:Will Monica drop out of being J Girl when she realizes she is now naked? Full nude scenes for Monica are few and fur between.

Ahh but she's not nakie... she's wearing FUR!!! LOL
You know that light at the end of the tunnel?

RunningBull wrote:Nice job with all those spots Paul. That looks like it took some time. Looks great.

Actually I bet he just cloned a texture in whatever drawing program he uses and painted it in.

Nope, that was all drawn by hand and is on the original art. You'll see it when I put it up on Ebay. =)

Well excuse me, and I doff my chapeau to your diligence.
I ride my bike to ride my bike, and sometimes it takes me where I need to go.
Top

I wonder if the dark hair is a new change or if it is a lighting effect.
"I was not tested for normality before I was entrusted with this mission," said Suriyawong. "But I have no doubt that I would fail such a test." --Shadow Puppets
Top

KnightDelight wrote:You know, as I see this, even if Phix had killed Monica for good, it would only be a tiny ripple in her long life. She would feel grief for a while and have to endure some retribution from those who cared about Monica, but, in the end she would simply move on. I doubt even the GGs, though really upset with Phix, would do anything bad to her. They would see it was an accident. Besides, they can't do anything to her unless they lure her out of the Library. Then, they would have to consider collateral damage. We would see this as a great tragedy but for Phix, it is just another character passing from her life. She has undoubtedly had hundreds of close mortal friends, even lovers, die in all sorts of tragic ways. It might even take a year or two to get past it, but get past it she would and her life goes on, and on, and on, and on ... Eventually she might even forget Monica entirely as Shellinx did.

it is true that she'd "get over it" in a few decades, due to her species long life-spans, etc... but when Phix was teaching Shelly about her transformations, she implied that there are RULES about killing Humans... especially ones that are NOT Demon-infested... and as we've seen, Sphinx's are ALL ABOUT RULES... so i think she was not only starting the "OMG I killed Monica" dance, but also the "OMG i killed a NON-Demon-Infested human, and the LAW is gonna get me for it!" one, too...
Don't planto mihi adveho illac
Top

6wingedserif wrote:I think it's cool how Paul found a clever way to portray Monica's utter nakedness in the last panel without actually drawing it. At first I thought it was a catsuit but that would be silly.

Heh. If you're not familiar with Brooke McEldowney's online comic, Pibgorn, let me introduce you to two of the major characters - Pibgorn, a fairy (botom), and Drusilla, a succubus (top).

Both of them habitually go starkers, Pib in her dappled green skin, and Dru in her scales... 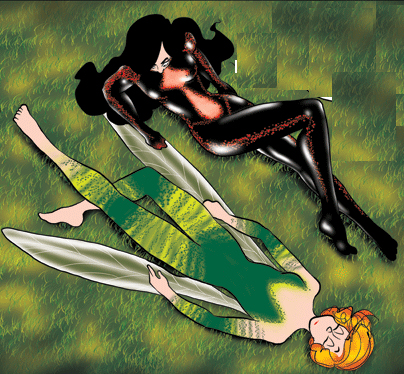 OneOddDuck wrote:I wonder if the dark hair is a new change or if it is a lighting effect.

I believe that it is an artifact of her Jaguar Girl form. Her hair has gone dark before as her power came to the forefront.
Top

OneOddDuck wrote:I wonder if the dark hair is a new change or if it is a lighting effect.

I believe that it is an artifact of her Jaguar Girl form. Her hair has gone dark before as her power came to the forefront.

Didnt her hair go dark when she got the symbol face right before she poited Nudge to Lake Magma?
You know that light at the end of the tunnel?

zachariah wrote:Will Monica drop out of being J Girl when she realizes she is now naked? Full nude scenes for Monica are few and fur between.

Watch out for protests from P.E.T.A.

This message is brought to you by the "Let the artist know how much you LOVE his work" council.
Top

You know I'm a bit worried about the Friday cliffhanger what with all the drama that's been going down so far. Fer'instance how many vamps do you think there will be come Monday?
I ride my bike to ride my bike, and sometimes it takes me where I need to go.
Top

Opus the Poet wrote:You know I'm a bit worried about the Friday cliffhanger what with all the drama that's been going down so far. Fer'instance how many vamps do you think there will be come Monday?

I, for one, doubt they will up and fly away...
Don't let other peoples limitations become your constraints!

If Phix is like so many humans, her first reaction would be to blame the vamps: "See what you almost caused?!?!?!?!" The reaction of most "theoretically{ intelligent critters is to shift the blame elsewhere. Maybe sphinxes (especially Phix) are different.
No trees were harmed in sending this message, however, a large number of electrons were seriously inconvenienced
Top

waldosan wrote:hey paul, would it be okay if i super impose monica in the last panel into that famous uncle sam war bonds poster from world war two?

Julie wrote:What does eating squirrel have to do with innocence? Squirrel (when cooked well) can be quite tasty...and really it's not that different than eating rabbit (hobbits eat rabbit, and they're generally not "jaded").

Well, yes, the eating it doesn't. The killing it, skinning it, gutting it, and chopping it up, however, does. Oh, and there is the matter of sticking pins through live spiders as well. Slow, painful death there.

There are levels of innocence, I think. Katherine may be confident when killing and eating a squirrel, but she's still innocent where human relationships are concerned. To our knowledge, she has never had a friend betray her or personally witnessed something as horrible as one of her closest friends killing and eating her own kind. Compared to Monica, Kath is a babe in the woods.

This...and butchering an animal for food isn't something that would necessarily make someone "not innocent." I'll give you half a point for the pinning live spiders thing, but only half a point because spiders make my skin crawl in ways that just aren't fun.