Forum rules
When two threads are posted for a day's comic, the thread posted first becomes the starting post. Please delete the second thread and add your post to the first thread. When naming the thread: Comic Name YYYY-MM-DD
Thanks guys! This keeps the forum nice and neat.
Post Reply
27 posts

Opus the Poet wrote:Scaling that out from Phix's known height in Sphinx mode, that bass is about 14 feet long. Anybody care to calculate the lowest note it can hit if the strings are the same as a regular fretted bass? I'm feeling mighty L-O-O-O-O-O-W

15ft according to Pablo. I asked a while back when the sketch came out on ebay.

And in the Wapsiverse, Fender was also a para so no questions asked about making an oversize guitar.
Top

lake_wrangler wrote:Shoulder BRAKE...
So, he's using his shoulder as "a device for slowing or stopping a vehicle or other moving mechanism by the absorption or transfer of the energy of momentum, usually by means of friction."

I can think of better uses for a shoulder...

So you're saying he's using his shoulder as a brake in order to slow things down so he can take a break to rest his sore shoulder? But won't the shoulder suffer more, from being used as a brake? Then he'll need an even bigger break for the brake!

When do we get a break from all this insanity?

No the "shoulder brake" is causing his shoulder to slow down.
Top

Don't forget this companion. I really liked it. 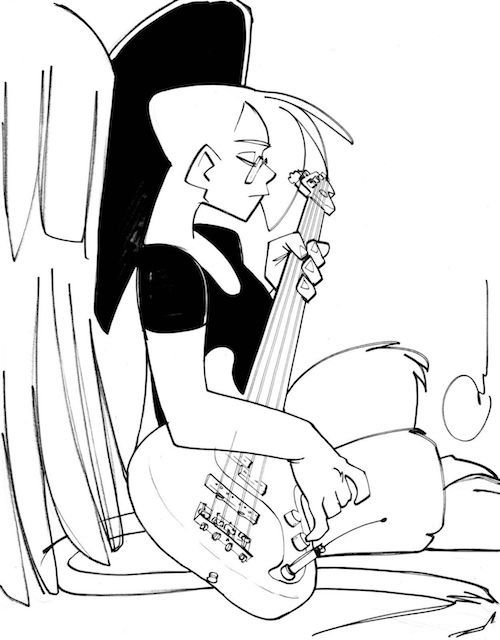 Typeminer wrote:I'm thinking her gig with Disaster Area might be the real reason Hotblack Desiato spent a year dead.

And after the show, they can catch a snack at the Restaurant at the End of the Universe! (Those suicide cows move slowly, you know. Perfect for stalking when tired and hungry.)

That way they'd be less likely to eat any prospective band members who failed the audition. It could be unfortunate to develop a taste for guitarist tartare, as the word would get out after a while and they might have trouble recruiting after that.

*Cues up "While My Tartare Gently Weeps" and runs like hell. Again.*
Saccharomyces cerevisiae is the linchpin of civilization.
Top

TazManiac wrote:I'd STILL love to get a band together with Stanley Clarke & Bootsy Collins and Stanley Jordan.

AnotherFairportfan wrote:"...when only two bass players were still in the running at the auditions, Eddi had a hard time choosing between them..."

I thought she already had a bass player. Is she hedging her bets by auditioning for another?

ow
Proof Positive the world is not flat: If it were, cats would have pushed everything off the edge by now.
Top

Arrrgh. Somewhere I watched a YouTube of the Imperial March done by a collection of very, very low bass brass and woodwinds. I think the "highest" instrument was a contrabass trombone. I'm talking those trapezoid flutes where you stand to play, etc. Alas, my Googlefu is not working, so you'll just have to imagine a dozen of New York's finest rumble makers in the same room tromping away at the theme.
Don't let other peoples limitations become your constraints!