A place to discuss the world of Wapsi Square
http://forum.wapsisquare.com/

by Dave
I had some fun (of the "burn your hands a bit" variety) over the past two weekends, and as a result have brought a piece of classic audio gear back from near-death.

A couple of members of our local amateur-radio e-comms group recently decided to sell their home and move to a retirement community in Oregon. As they're downsizing their living space, they had quite a few things they didn't care to take with them, and donated some of their used electronics gear to our repeater group for sale to help fund the repeater. They gave our senior guy the right to a "first pick" of anything he wanted for himself.

One thing he found was a McIntosh MA-5100 stereo preamp/amp, a 45 watt/channel beast built back around 1970. He was warned that it wasn't working... instead of making music, one channel was making 45 volts of DC, and would "burn up" any speaker it was connected to. This is usually a sign of a shorted output transistor... and the power transistors from that era were a bit fragile. He figured it wasn't worth more than about $20 as a flea-market sale item in its current condition, didn't have time to diagnose and repair it himself, and spent some time persuading me that I might find it a fun challenge. Eventually I caved in and agreed to give it a look.

This particular "Mac" was one of their first solid-state amplifiers. By today's standards it's of a somewhat primitive design (pseudo-complementary NPN output stage) with distortion specs that are nothing special, and a reputation for being a bit "hissy"... but there are a lot of people who seem to feel that it's actually one of the sweetest-sounding amplifiers of its era. They sold for $450 when new, and working units are selling on eBay for just about that price today (smaller dollars, of course). It's the sort of amp I could only have dreamed about owning back then (I was just about to enter college, and my whole first stereo cost only a fraction of what this thing sold for).

It's beautifully built - my friend describes it as resembling some of the military/aerospace electronics he was designing back around then - robust metal chassis, heavy transformer, big filter caps, two big heat-sinks in a protective cage, all through-hole components on several PC boards (easy to work on) and beautifully routed-and-laced point-to-point wiring. It has not one, but two "phono" inputs (even a single phono input is rare in preamps these days), and unlike a lot of older preamps it can handle the high signal voltage from a CD player without distorting. The cabinet has what appears to be genuine high-quality hardwood veneer - I could swear they actually used a "bookend" set of veneer on one end to create a pleasing grain pattern. Neither of us could face the thought of sending to to a dumpster or seeing it sold for parts, if it was salvageable. So, I took the schematic and dug in. 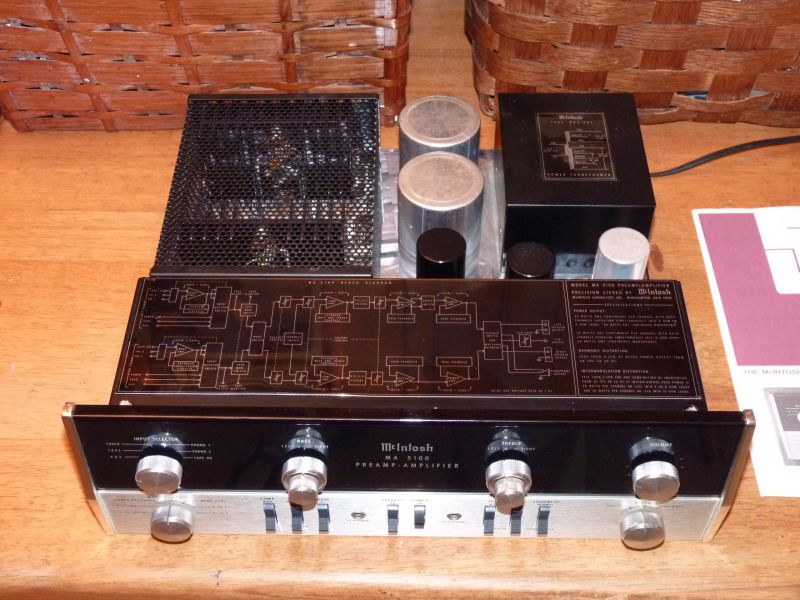 Fortunately, our first guess was wrong - the output transistors were still OK (if they short out, the stress tends to damage several "upstream" transistors and other components as well). After powering the amp up partway and comparing voltage levels on the two channels' boards, I found an "impossible" voltage level and identified the bad component - one of the bad board's transistors in the input/feedback differential pair had failed "open", and this caused a "go positive all the way" fault.

The original transistor types are mostly unavailable today, but properly-selected modern replacements are usually superior. I decided to give the amp a real "refresh" while I was working at it, to make it reliable enough for more years of good service, and replaced:
I also cleaned all of the switches and controls with a suitable spray solvent, let the solvent evaporate, scrubbed the knobs and cleaned the front panel metal and glass, gave the cabinet veneer a light wipe-down with Watco "danish oil" to renew the finish, and then buffed it.

I carefully powered it up, ran it into some dummy-load resistors for a while, and adjusted the output-stage bias current to McIntosh's specifications.

The results: well, it work again now, and works quite nicely. It drives my little set of spare "bookshelf" speakers perfectly, although they aren't good enough to really evaluate its sound quality properly. With a set of good headphones, it sounds really sweet. It can heat up the "dummy load" resistors quite nicely, without its own output transistors and heat-sinks becoming more than very slightly warm to the touch. Two weekends of spare time, and about $30 - well spent! 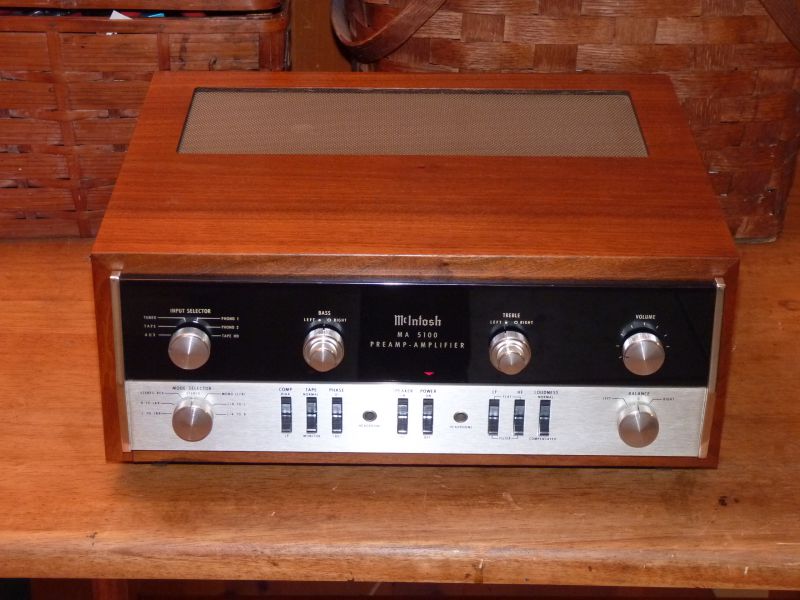 I'm not sure where this is going to end up... neither my friend nor I have a need at the moment for an integrated amp like this, but neither of us really wants to see it sold off to an unknown buyer at this point. We'll probably hold on to it for a while until a good need for it turns up.

by Atomic
What a beauty! Yes, do keep it, and find some good speakers to feed. A friend of mine had a simlar McIntosh amp, whose design I remember because it had 4 or 5 of the amp tubes in a row just behind the control panel -- an open top system. Beautiful wiring, too -- stress relief loops, floss-laced wire bundles (think wide dental floss), and on and on. They were made to look and sound beautiful.

Now get off my lawn.

by stjen
Good for you -- looks like a good job.

It's been years since my simple electronics days (about 40 years ago when I built various Heathkits). I'm curious -- how do you "match" a transistor pair? What's the visible (audible) difference between a matched pair and a mismatched pair in use? (I've likewise heard that on certain old Tube amplifiers, you need to match tube pairs/sets in a similar fashion.)

Thanks for indulging a old hobbyiest.

by Dave
Well, transistors and tubes are both gain devices. That is, they let a certain amount of current flow through their outputs, which is proportional to the signal (current or voltage) being fed into their inputs. The proportion varies from device to device... some have more gain than others, and they also have different voltage thresholds on their inputs required to allow output current to start flowing (this is a fairly crude and simplistic description, of course). In one batch I tested, the current gain ranged from as low as 150, up to as high as 300.

In cases where transistors are being used in pairs ("working against each other" in some fashion) it's often beneficial to have the paired transistors be ones which have similar gains, and/or similar threshold voltages. This helps keep the circuit operation symmetrical (that is, it's as easy to "push it" in a positive direction as it is to "push it" in the negative direction)... it's "balanced". Good balance can help keep distortion down to a minimum, and can help keep unwanted "offset voltages" from appearing (like a DC voltage at the amp's speaker terminals). It requires testing a bunch of transistors, and sorting them into batches depending on their gain or threshold voltage or both.

I did some of the testing using a simple digital multimeter which can do both gain and threshold-voltage tests. For the big power-output transistors, I dragged out an old Heathkit "curve tracer", which runs a bunch of different voltages and currents into them and displays the results as a set of curves on an oscilloscope. I looked for pairs of transistors with curves that were as close as possible to identical.

It may have been overkill in some cases, but since I was putting a bunch of time into reworking the amp I figured I'd try to do it properly the first time and not have to go back and re-do it later. As a side benefit, I've now got several batches of matched sets of the small-signal transistors I used, so if a similar project turns up I'm ready to go!

by stjen
cool -- thanks for the lesson -- makes a lot of sense.
All times are UTC-05:00
Page 1 of 1
Powered by phpBB® Forum Software © phpBB Limited
https://www.phpbb.com/