What ever happened to the band of '59?

Let your stereophile run loose! Talk gear, media, and other electronics that makes music for your ears.

What ever happened to the band of '59?

(Reposted from The Comfy Couch of Confusion)

First, a new video from this past April.

The legend of Big Daddy


Charles G. Hill/dustbury.com wrote:Return with us now to those thrilling days of yesteryear....

It was August 1959, and the Los Angeles-based musical group known as Big Daddy had finally wangled a recording contract. Their manager, wanting to give the waxing as much of a push as possible, got the band booked on a USO tour of Southeast Asia, hoping for some positive publicity. Unfortunately, the United States had no military involvement in Southeast Asia in 1959, or so the official story said, and therefore the publicity value of the tour would have turned out to be nil - had the band come back at all, which it hadn't.

Given up for dead after their vehicle was found mired in quicksand, the band spent the next twenty-four years in the custody of Laotian revolutionaries. Rock and roll musicians being at least as unpopular with the U.S. government and its official radio service as were the Communists, the Laotians more or less adopted Big Daddy as Fellow Travelers. The war, of course, went on, and during the Sixties and Seventies, returning US troops told tales of an American band being held captive. Special Forces were eventually able to piece together the story, and after the usual interminable delays, a rescue attempt was mounted in 1983, under the guise of a British motion-picture production.

Finally back in the States, Big Daddy agonized about that first recording session they had missed. Of course, during the intervening years, their record company, like so many little diskeries, had folded, and worried that the band might become a burden to the taxpayers, government officials brought in some sheet music and arranged a recording session at Camp David. The sessions were startling; although the band still had its chops, having been allowed to play by their captors all those years, the cultural isolation of northern Laos meant that Big Daddy had heard virtually none of the last two decades' worth of popular music, which meant that their recordings of Seventies and Eighties material, all that could be found in the nearest sheet-music store, were perforce arranged for Fifties performance styles. The record, of course, was unreleasable, so naturally it fell to Rhino Records to release it.


The Same Source wrote:Actually, the Big Daddy band had been formed in southern California in the Seventies, under the distended monicker "Big Daddy Dipstick and the Lube Jobs", playing the oldies straight; one of their regular gigs was a floating houseboat at the Redondo Beach pier. Then again, "straight" is perhaps the wrong word. One of their tapes, a smirky rewrite of Willis Alan Ramsey's "Muskrat Love", replacing muskrats and love with hamsters and lunch, found its way to the Dr Demento radio show, and while "Hamster Love" never got a formal release as a 45, it was a regular entry on the Doctor's Funny Five.

For a discography, with snarky comments on the arrangements of the songs, click here.

Anyway, the following comment is to be found under the video above:


EXCITING NEWS coming soon from "BIG DADDY, The Band of '59"

Immediately followed by the following comment that followed it directly:

A complete compilation with EVERYTHING (including the zoo commercial)?

I can haz box set?

Also - anyone over 35 or so from Chicago (or who got WGN on cable) ought to remember this.

(Man, it's hell translating between two flavours of BBCode) 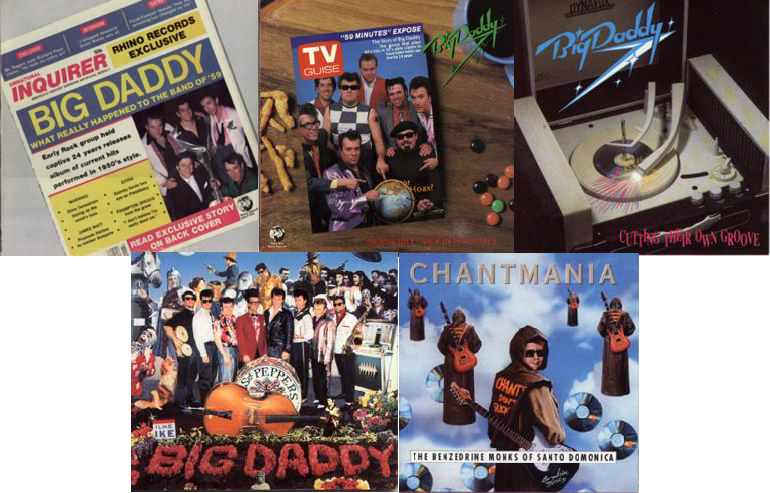 Return to “The Audio Room”